Borna Coric is in the Semis at the GERRY WEBER OPEN. 7:5, 6:3 was the Croatian's score against Andreas Seppi.

But it shows that grass is not his most favourite surface. Borna Coris has never got further than the second round - either in Halle, in Wimbledon or anyway else. But this time the Croatian wants to know. At this years GERRY WEBER OPEN he worked hard for success on the fastest of all surfaces.

Andreas Seppi was in charge off the most spectacular points in the match, but Borna Coric faught for every point. This time he really wanted to know. For the first time he was in the Quarters of a grass court tournament and he really wanted to get to the Semis.The base for getting there: to serve well. And that's what the 21 year old Croatian did. In the first set Andreas Seppi had not one break chance - Borna Coric had five. The Italian was able to survive the first four break points. But at 5:5 that was it. Borna Coric got the break and shortly afterwards the first round 7:5.

And he didn't stopp in the second set either. Sweat was dripping because the tennis professional was working so hard. Nearly after every rally the Croatian had his towel handed to him, so as to wipe it off. Borna Coric kept his rhythm, didn't slow down, got a break in the first game of that round. And the base of success - to serve well - was still standing. Andreas Seppi couldn't get a break in the second set. And Borna Coric was even able the take the Italian's serve to make it 6:3.

"I had not expected to get so far. That I've done it makes me extremely happy", Borna Coric said about getting to the Semis smiling. He will now meet Spaniard Roberto Bautista Agut. 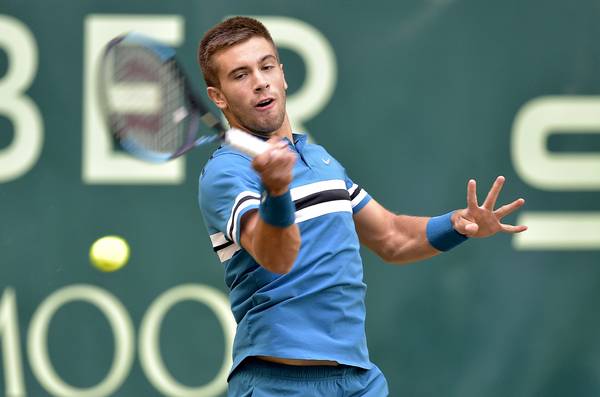