Nick Kyrgios shows his class with a 6:3, 7:5-victory over Daniel Altmaier

First performance on the grass at Halle, first victory; Nick Kyrgios shows a really strong performance in his debut at the TERRA WORTMANN OPEN and defeats Daniel Altmaier in two sets 6:3, 7:5.

Before the Australian Open moved to their current location in Melbourne, the tennis’ world elite served in the dignified Koojong Lawn Tennis Club from 1972 until 1987– a tennis club with today 26 lawn-and 25 hard courts. Australians still love to play on the quickest surface of the world and this goes for Nick Kyrgios, too. He has the best prerequisites for this, too. Strong serves, powerful baseline shots and secure volleys.

He showed a lot of these strengths from the start onwards against Daniel Altmaier. On the one hand during his own service, which he always won confidently. The German didn’t even get near a break, wasn’t able to earn a break point. And when Daniel Altmaier was serving, the Australian seized his chances without mercy – either by direct points or he forced the 23-year-old German to fault. This meant that Nick Kyrgios had his first set point after 24 minutes, which he converted promptly to make it 6:3.

While Nick Kyrgios couldn’t keep up his high level in the second set, Daniel Altmaier improved. The German was able to win his service game. Now the 27-year-old Australian was making mild mistakes and seemed to lack concentration. Still, he held his service, didn’t allow Daniel Altmaier to get a break point. Daniel Altmaier served confidently; let his opponent only get three points in five games. Then, suddenly, Nick Kyrgios beat back. At 6:5 he converted his second break point and should be happy about his 6:3, 7:5-victory and thus the entry into the round of 16.

“It was really great to play here on the Centre Court in Halle. I felt really good and that is why I was able to show this great performance. That was necessary, too, because Daniel is a very good player, who demands everything off you”, Nick Kyrgios said satisfied after the match. The Australian has now a taste for more at the TERRA WORTMANN OPEN. 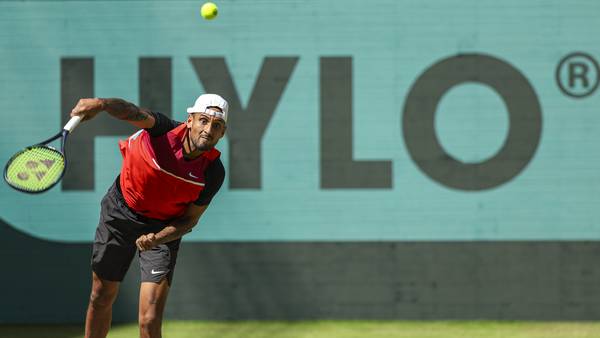