After victory against Bonzi the Greek player now meets Kyrgios

The favourite for the title, Tsitsipas, is through to the round of 16 after his 7:6, 1:6 and 6:3-victory against Benjamin Bonzi at the 29. TERRA WORTMANN OPEN and will now meet Australian Nick Kyrgios. A dream duel for every event organizer. The match was worthy of being a quarter-or semi-finals match.

Before Tsitsipas could think of a duel with Kyrgios, the World No 6 had to overcome the difficult task of Bonzi (ATP 52, because the Frenchman put up a real fight. In the first set both players got their games through without giving their opponent a chance to break, the tiebreak was the logical conciquence. This was to be a clear thing for Tsitsipas, who controlled the 25-year-old Bonzi to make it 7:1.The second round was then a festival of breaks. Bonzi took his opponent’s service three times, just once the 23-year-old number 2 seeded player of the tournament fought back. In the end it was 6:1 for Bonzi – there was a sense of surprise in the air. But Tsitsipas found his first service again and offered Bonzi only little. He got a break at 3:1, and the rest went as expected. The Greek player converted the first match point to make it 6:3.

Is he hereby a favourite to win the tournament? Tsitsipas, who has already won 36 matches on the ATP-Tour so far and thus stands at number one on the rankings list, doesn’t want to think that far yet; “I want to play good tennis, win a couple of matches and get used to the grass”, Tsitsipas states as his expectations for the week. Next stop now is Kyrgios. The spectators can look forward to an exciting match on Wednesday afternoon – to high level and hot-blooded tennis. 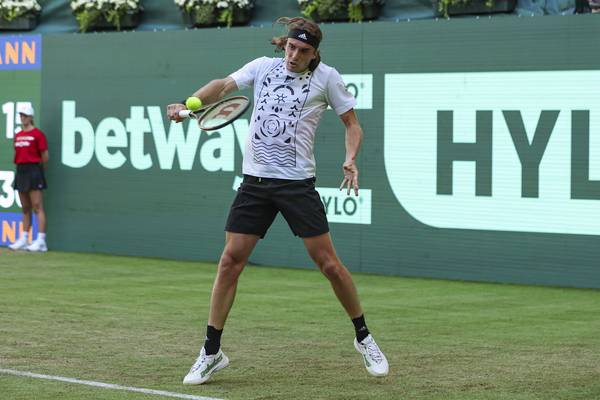